In our previous tutorial we have created JSON ListView with Single type of single item but, In this tutorial we would create Flutter Custom JSON ListView with Multiple Text Items Example. All the items is coming directly from our online hosting + domain server. Where we have hosted MySQL database using PhpMyAdmin control panel. All the data is stored in MySQL database Table. We would make a API(Application Programming Interface) using PHP scripting language which would convert all the MySQL database data into JSON from. So let’s get started 🙂 . 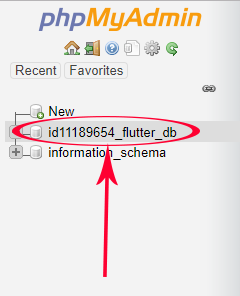 2. After selecting the MySQL database we have to make a Table in database named as Student_Data with 4 Columns and Hit the Go button to create Table.

3. There are 4 columns in our Table. id, student_name, student_phone_number and student_class. The id datatype should be set as integer and all the other three columns type is Varchar. The length should be 255 and id should be set as Primary Key with Auto Increment. Hit the Save button after making changes.

4. After done creating table the Table structure should look like below screenshot.

5. Now click on the Insert button to insert some records manually.

6. After done inserting records Table will look like below screenshot. Now all the database creating part is done.

2. Creating PHP Script to Convert all the MySQL data into JSON :

1. Create a .PHP extension file named as getStudentInfo.php and paste all the below code inside it. You have to change the database name, database hostname, database username and database password of your own MySQL database.

2. We have to upload getStudentInfo.php file on our online web-hosting panel using File Manger. I have a sub-domain named as flutter-examples.000webhostapp.com connected with Web-hosting space. After uploading file to our server the File path will be https://flutter-examples.000webhostapp.com/getStudentInfo.php . This would be our API URL we would use in flutter application. If we would run this URL in web browser then it will show us all the records in JSON format.

2. Open the pubspec.yaml file in any code editor and find dependencies and Put http: ^0.12.0 in next line.

3. After saving the file we have to open our Flutter Project root folder in Command Prompt or Terminal and execute flutter pub get command. This command would download the http library from online package server and install it.

Now our configuration part has done.

3. Create a class named as MyApp extends with State less widget. This is our main Root view class. In this class we would call JsonListView() class.

6. Create a class named as JsonListViewWidget extends State. This would be our main child class.

7. Create a String variable named as apiURL. Here we would assign the API URL in JsonListViewWidget class.

8. Create a Future function named as fetchStudents() in JsonListViewWidget class. In this class we would parse the JSON data with Studentdata class.

9. Create another function named as selectedItem() with Context and String argument. Using this function we would print the Selected Item Student name on screen using Alert dialog message box.