Find and Remove Special Characters From String in Flutter Dart

Hello friends, In today’s tutorial we would learn about finding and replacing special characters like ‘@#%^&*();’ and many more of them into a String in flutter. This all can be happen use of RegExp function which is a regular expression. We would use RegExp with String replaceAll() method. To understand how this would works ? First we have to understand what replaceAll() does ? String replaceAll function find and replace given expression to our given String or Character. Now when we would use RegExp and pass a fix argument inside it we would simply telling the replace function to remove all the given characters which is not string. I’ll explain them in the next steps. So in this tutorial we would learn about Find and Remove Special Characters From String in Flutter Dart. 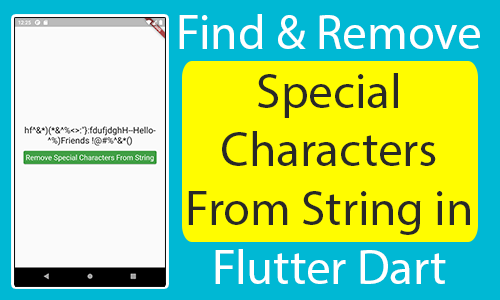 Contents in this project Find and Remove Special Characters From String in Flutter Dart :-

2. Creating our main runApp() method, Here we would call our main MyApp class.

6. Creating a String with some random characters. We would remove special characters from this string.

7. Creating a function named as removeSpecialCharacters(). In this function we would remove special characters from String the update the String using STATE.